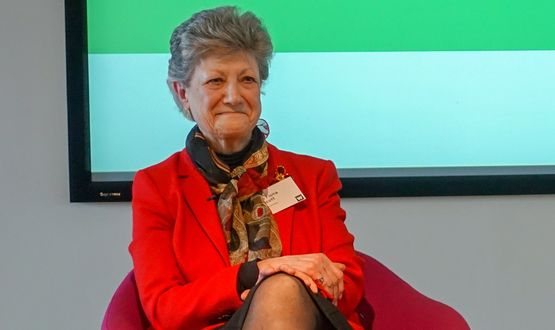 Colleagues have continued to pay tribute to “wise” and “passionate” Dame Fiona Caldicott as her family set up a charity page in her honour.

NHS Digital chief executive, Sarah Wilkinson, described Dame Fiona as a “phenomenal” woman who “inspired so many” as a senior female leader in the NHS. Others spoke of her how her “integrity, guidance and compassion” had shaped the way patient data is handled, putting the patient at the centre of decisions.

News about Dame Fiona’s passing broke on 15 February and a tribute written by John Carvel, on behalf of the National Data Guardian panel, was posted on the gov.uk website.

Her family have set up a JustGiving page to raise money for the Myton Hospice, which helped them after Dame Fiona was diagnosed with pancreatic cancer in August 2020.

In November 2014, Dame Fiona was appointed to the office of the National Data and was confirmed as the first statutory holder of the position in April 2019.

Dame Fiona’s career as the National Data Guardian was integral in shaping the way the NHS handles patient data. She oversaw the establishment of Caldicott Guardians who are responsible for protecting the confidentiality of patient information within their organisation, as well as several reviews into the safe handling of patient data which resulted in multi-million pound funding boosts from the government.

Part of her work involved working with teams at NHS Digital and those who served as Caldicott Guardians. Colleagues have shared their memories of working with her, here is what they had to say:

“She was truly a phenomenal lady. Aside from the extent to which she inspired so many of us as a senior female leader who was wise, passionate, dedicated, hardworking, caring and unstintingly patient centric, she was one of the critical thinkers in the field of medical confidentiality and public trust.

“We will honour her memory. I personally, and NHS Digital as an organisation, will strive every day to uphold the standards that she set.”

“In my early career with the NHS back in 1997 I remember the launch of the Caldicott Principles, and the clarity and simplicity they brought to how we use data in the NHS.

“Some twenty years later I found myself working with Dame Fiona to implement the national data-opt out as one of the recommendations from her third review. I was intrigued and somewhat in awe of the person behind this work but it was easy to see why she had continued to be the person selected to lead this work over this period of time.

“Her style was to listen to colleagues, and to importantly to listen to patients, service users and the public. She carefully and quietly considered what people had to say to lead to principled and thoughtful conclusions.

“Caldicott Guardians are at the heart of every health and care organisation today continuing to maintain public trust so that data can be used to benefit us all. Dame Fiona has left health and care with a strong and powerful legacy to guide appropriate data use going forward.”

“I have the honour, alongside thousands of other Caldicott Guardians across the NHS, of fulfilling a role that bears Dame Fiona’s name. We attempt to lead and embody the principles she laid out over the last 25 years  — by putting the patient at the centre of decisions about information and data.

“I first heard of the “Caldicott Principles” when they were published while I was at medical school. The principles were so useful and became so pervasive in the culture of British medicine that people forget that there was a time when they did not exist.

“Dame Fiona’s leadership and guidance shaped how we handle and respect patient data in this country. Millions of people have benefited from her work, even if they may never know it, and her legacy is to have instilled those values into my profession, our organisation and across health and care. It is now our job to be true to those values in her memory as we continue this journey.”

“I have had the great privilege to know and work with Dame Fiona over the last two years. She was an inspirational leader, mentor and highly respected professional colleague whose integrity, guidance and compassion has shaped patient choices and greatly increased transparency and accountability over how health and care data is used today.

“Her wisdom, expertise and commitment to supporting the safe, secure and appropriate use and sharing of healthcare data is her lasting legacy, which we can all build on and take forward.”