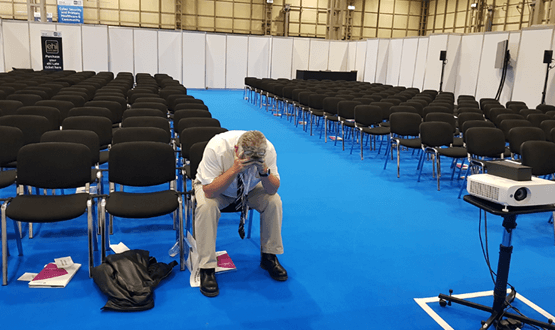 This week sees the retirement of Professor Joe McDonald, who has been child psychiatrist for 30 years and is regarded as one of the country’s leading chief clinical information officers (CCIOs). Darren McKenna, Joe’s colleague and CIO at Cumbria, Northumberland, Tyne and Wear NHS Foundation Trust recalls some key moments in Joe’s time as CCIO at the trust.

I remember Joe as one of our child psychiatrists, long before he became CCIO. Shortly after the trust became Northumberland, Tyne and Wear, merging services in Newcastle and Sunderland, the trust held a teambuilding event. After much polite discussion without entering the ZOUD, Joe stood up and said “there’s an elephant in this room, to part of the room, this doesn’t feel like a merger, it feels like a takeover,”. After he said that, the whole room sat up and listened as Joe delivered his opening line and then skillfully steered the conversation into a more constructive direction bringing the whole room together.

Of course, he had to point out the significance of holding an event for a newly formed trust which covered Newcastle and Sunderland at St James Park, wryly suggesting to the CEO at the time that a neutral venue may be better choice next time.

Joe has always been a huge advocate of digital technology, he could see the benefits for clinicians but most of all for patients. He applied for the CCIO role in 2012 and he ably picked up the reins from our previous CCIO, the fantastic Dr Jonathan Richardson. I couldn’t believe my luck.

In the first few weeks in post, Joe chose not to sit in his office and instead sat in the department kitchen, working on his laptop. “I’m Joe”, he said chirpily to everyone who came in to make a coffee. Within weeks he knew everyone and they knew him and he quickly became part of the team.

Joe has made a massive impact within the trust, with one of his infamous soundbites at the ready, he would always keep the view of the patient and clinician at the front and centre of what we deliver.  Digital mental health in the North East would not be what it is now without Joe’s half of the handclap.

Building trust and developing partnerships is natural to Joe – it’s what made him a great doctor and a great CCIO.

He understands the power of networks so it’s not unsurprising that he became the first chair of the Digital Health CCIO Network in 2013 and has helped shape what it is today.

He was in his element at Digital Health events with the chance to take to the stage (did he ever mention he nearly dropped out of medical school to present The Tube?).

My favorite Summer School was in Leeds when he left dinner with a bottle of champagne and two glasses in one hand, and the beautiful Fiona McDonald in the other. With most people not realising she was Mrs McDonald they left a hushed and surprised room behind them.

During his time at the helm of the network Joe has undoubtedly influenced the national digital strategy and has done his best to keep everyone off that bus to Abilene.

At the risk of becoming the “Sepp Blatter” of the CCIO Network and with an eye on retirement Joe passed the baton over to the brilliant Dr James Reed in 2019. I think he was secretly pleased to hand the chair over to another psychiatrist.

Information sharing is one of Joe’s greatest passions – more specifically, winning over the hearts, minds and trust of the public is his passion. After all “the secret of getting consent, is to get consent”.

I have no doubt that there would be no Great North Care Record without Joe (and a few nights in his beloved Earl of Pitt Street pub). Sure we would have information sharing in the North East, maybe two or three record sharing projects across the North East. But, without Joe’s vision, tireless work, building trust, partnership working, “the wall of love” and the cultivation of the installed base, we would not have the Great North Care Record helping the North East and North Cumbria be one of the safest places in the world to receive care and the best place in the world to do research. Thank you Joe.

One of the best things about working with Joe though – is the the fact that there is never a dull moment.

It has been an absolute pleasure, great fun and I have personally learned massive amounts from one of the most incredible people I’ve been blessed to work with. It’s just a shame though he never did win CCIO of the year, not that he’s bothered…(see main image).

Though Joe has talked about retiring for some time now it’s hard to believe it has come around.

I know he is looking forward to spoiling his new grandson, sailing round the Greek isles with Fiona and embarking on new adventures. He might even get around to writing that book.

He will be a huge loss to the trust, the region and nationally but his digital legacy will live on, and don’t worry Joe when you are enjoying retirement we’ll keep your family motto in mind “Quod magis vos opus enim melior sum vultus  – The harder you work, the better I look”.

401: Rethinking Education to Set Our Kids Up for Success With Jesse Elder