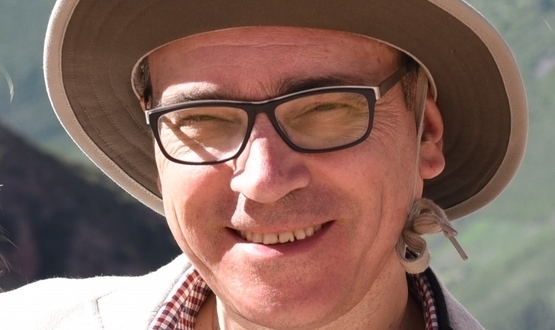 In a new series for Digital Health profiling members of the Networks, Nicholas Oughtibridge from NHS Digital reveals what areas of digital health interest him and more importantly, who would play him in a film of his life.

Could you explain what your role entails?

I lead the data architecture team at NHS Digital, describing data for the health and care system, publishing the NHS Data Dictionary, setting the architectural principles for data use and reuse, and trying (with increasing success) to show how the data recorded by clinicians can be the source of data needed for other purposes, from commissioning and regulation to public health and research.

The pandemic has shown the real power of NHS data to help the people of England. I’m proud of how our teams have used existing data for new services, like the shielded patients list.

I also chair the British Standards Institute committee for health informatics and lead the development of international standards for health IT system safety and security in ISO and IEC.

What parts if digital health interest you the most?

It’s the challenging area of how terminologies like SNOMED CT fit in with all the diverse data structures in clinical record systems. Each system makes different assumptions, all of which make interoperability difficult.

We’ve recently awarded a framework contract to DXC with CSIRO to help share meaning across the different information structures using terminology servers. My vision is that we can use and share care records safely so clinicians and computers can understand and use them in different settings. We’re moving in the right direction but have further to go.

What projects are you currently involved on?

The final activity is the sharing of rich data definitions (metadata) across the health and care system.  For that we are using the University of Oxford open source Mauro Data Mapper.

In the ISO / IEC health IT system safety and security space, we have a large set of standards coming through, but probably the most significant is the standard for the safety of a hospital network (IEC 80001-1) which should be able to replace the DCB0160 safety standard. For consumers, the work Charlie McCay is doing to have a label (similar to the energy labels on fridges, TVs etc.) for health and wellness apps is a landmark standard.

If you have one piece of advice for other NHS IT leaders, would it be?

If you could have any other job, what would it be?

Moving completely outside of digital health, I plan to take a volunteer role on the Keighley and Worth Valley railway, the oldest standard gauge heritage railway. Its practically in my garden! For the job, I’m looking for something that bridges responsibility and customer service, so guard or station master. When I was in junior school, my best friend Billy and I planned to run Disneyland (but none of us knew what it was like). That again puts the customer experience first.

What’s your favourite piece of technology at home and why?

It’s a close decision between (one of my) Raspberry Pi computers and my somewhat battered Kenwood Chef.

The wonder of the Pi is that it is so versatile. I even got Windows 10 running on it, though it wasn’t fast.  I’ve also used one for doing some Computer Numerical Control laser cutting.

However, I’m going to settle on the Kenwood Chef. I use it to knead dough and it does it consistently and efficiently. It’s a “Design Classic” (check out Kenneth Grange on Wikipedia), looks good and works.

Who would you like to play you in a film?

The person I get compared to for looks (but I doubt his acting prowess) is the BBC’s Nick Robinson. In a film I can be all the things I wish I were, so I’ll go with Tony Robinson and hope all my cunning plans come off.