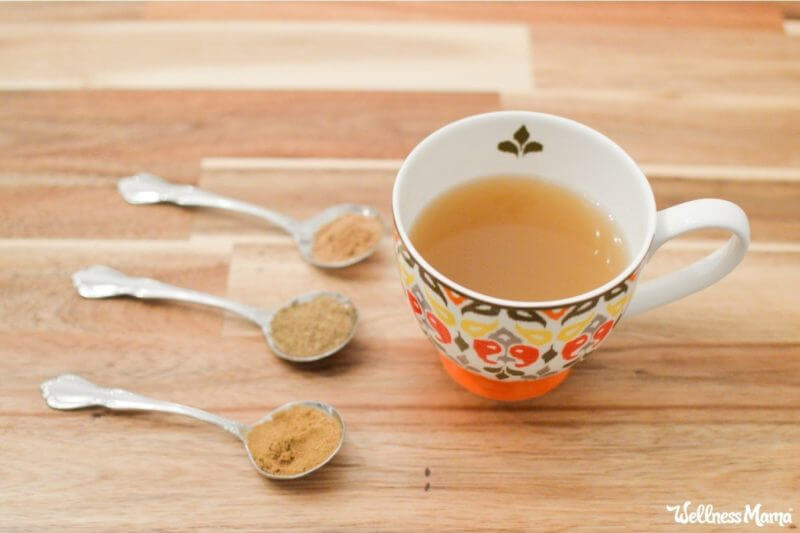 After a surgery my husband had years ago (with resulting secondary infection and IV antibiotic use), his gut needed a little extra help. A gut rehabilitation he was following at the time (see below) suggested he try making a cumin coriander fennel tea to help his bloating and digestive problems.

It worked! Now we are big fans of this ancient Ayurvedic remedy.

Also called CCF Tea (for obvious reasons), we use this recipe any time one of us has nausea, constipation, or an upset stomach, or just needs a comforting nightcap.

Why to Try Cumin Coriander and Fennel Tea

The taste of this tea is a little unusual as you might imagine (in fact, we jokingly call it “Taco Tea”) but it turns out that this three-seed tea has a host of benefits.

In combination, these potent spices have a unique soothing ability and even though I wasn’t on the protocol, I found this blend relaxing as an evening tea or as a mid-morning drink for mental clarity. During post-partum it also seemed to increase my milk supply and calm my baby’s stomach as well.

(Note that this would not be the best choice for anyone on an autoimmune paleo type diet as it does contain seeds, but those who can consume spices and seeds can enjoy this tea).

Here’s why these spices are so beneficial:

Cumin has a long history with documented use in ancient Greece and Rome, as well as in biblical times. In fact, evidence of the use of cumin as a remedy was even found in the tombs of ancient Egypt and in writings from ancient India.

Now modern studies show the ancients knew what they were doing when it came to cumin. Studies show it can help:

Cumin is also the source of black cumin seed oil, which also has a long history of medicinal use in various cultures.

Some people notice skin benefits from using cumin as well. I even use it in this DIY antioxidant face scrub recipe.

Coriander is the seed of the cilantro plant. It also has a long history of use in Asia and Mediterranean countries for thousands of years. Evidence of its use was found in ancient Sanskrit text and in ancient Egypt.

In cooking, it is often part of curry blends and is used to flavor gin and certain other alcohols.

It has been used as a digestive remedy throughout history and is also documented as being used as a relaxing spice to calm an anxious mind. It is also sometimes used in tinctures and remedies for respiratory problems, urinary issues, and nervous system disorders.

Another spice with a history of ancient use by the Chinese, Indian, Egyptian, Roman, and Greek cultures as a carminative (remedy for bloating and gas) and expectorant (respiratory remedy).

It is often given to nursing mothers to improve milk supply and because its soothing properties seem to help calm a colicky baby through the milk as well.

It is found in recipes in many cultures, especially in Italy and France.

Read more about the benefits of fennel (+ recipes) here.

Wait… What About Weight Loss?!

You’ll love this podcast all about the metabolism-boosting benefits of drinking your spices. It’s the perfect comforting replacement for snacking at night.

Some of the benefits often associated with this tea are:

How to Make CCF Tea (Cumin Coriander and Fennel Tea)

Unlike some herbal remedies (homemade cough drops… I’m looking at you), this remedy couldn’t be easier to make with a few basic supplies and some cumin, fennel, and coriander seeds.

I’ll warn you that the taste is a little bit unusual, especially if your main method of tea consumption tends to be of the sweet tea variety. I love its warming quality though and find it very calming and soothing (and I think you will too!).

Also, Christa (founder of The Whole Journey and the Gut Thrive in 5 course… find her on my podcast here) recommends adding some lemon or lime and some raw honey to help the flavor.

You can also pour the tea over ice to make an iced version that is a little more enjoyable (though I found the hot variety more soothing).

I’m no expert in Ayurveda so I’m not sure there are any additional health benefits, but I noticed a great taste benefit from adding a pinch of cinnamon or a few slices of fresh ginger root to the brewed tea.

Using CCF Spices in Other Recipes

On their own, these spices are some of my favorites to use in cooking, so I always have them around the house. You can use these spices for:

A soothing and earthy herbal tea that is beneficial for the digestive system in reducing gas and bloating and which has a long history of use in Ayurveda.

Can I use already ground spices? In theory, yes, though all original sources recommend using whole dried spices and using immediately before brewing.

Here is a video of Christa showing how to make this tea:

I would not personally drink fennel tea during pregnancy without checking with a doctor or midwife, as there is some anecdotal evidence that fennel may cause uterine contractions. Of course, it is important to check with a doctor before using this or any other natural remedy, especially for those with any existing health condition.

Ever tried this? Can’t imagine adding taco seasoning to your tea? Weigh in below!

Katie Wells, CTNC, MCHC, Founder and CEO of Wellness Mama and Co-Founder of Wellnesse, has a background in research, journalism, and nutrition. As a wife and mom of six, she turned to research and took health into her own hands to find answers to her health problems. WellnessMama.com is the culmination of her thousands of hours of research and all posts are medically reviewed and verified by the Wellness Mama research team. Katie is also the author of the bestselling books The Wellness Mama Cookbook and The Wellness Mama 5-Step Lifestyle Detox.

It Shouldn’t Be This Hard to Be Healthy…

Wellnesse Products is my very own personal care line created for my family and yours!

I couldn’t find natural products that met my standards so I created my own. Wellnesse is the result of a decade of research and dozens of tests, and your family can now use them too!

You May Also Enjoy These Posts…

6 Criteria You Must Consider Before Buying Curtains For Windows

422: I’m So Effing Tired: A Proven Plan to Beat Burnout & Boost Energy and Reclaim Your Life With Dr. Amy Shah

Olive Oil Benefits (& How to Choose One That Isn’t Fake!)

Does Your Child Need to Develop Fine Motor Skills? How About Gift Wrapping?