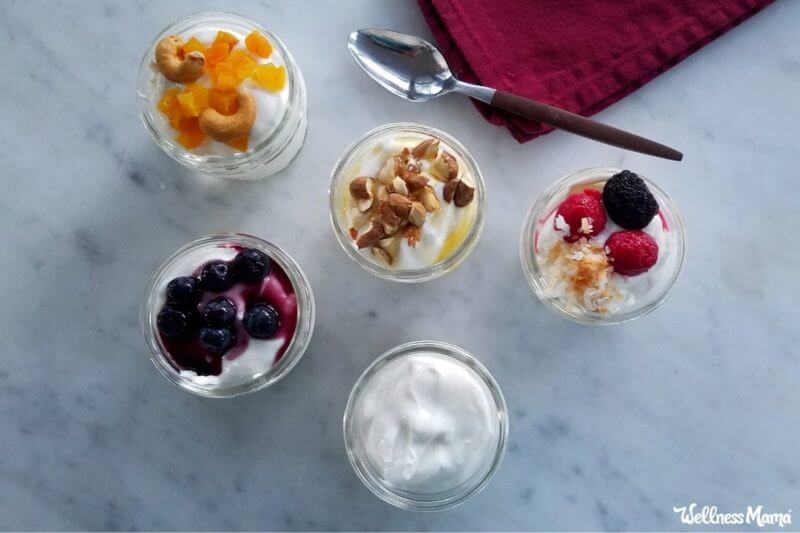 Update: Since the original writing of this post, I acquired an Instant Pot with a yogurt making function. It makes yogurt-making a breeze and I can do a whole gallon at a time. For the most part, the process is the same as what’s listed below. In step three I leave the warmed milk in the Instant Pot instead of dividing it into smaller jars and in step five I put the bowl back into the Instant Pot for the incubation period.

When I started experimenting with the GAPS diet I noticed right away that eating yogurt was a big part of the diet and the process of regaining gut health.

I was super intimidated by making my own yogurt but after some initial research, I decided that it didn’t seem too hard and that I should just jump in and give it a try. I’m so glad that I did because the process was so easy and the results were wonderful.

During my research, I found that like most things, there are a million different ways to make homemade yogurt. You can order a starter or use a commercial yogurt as your starter. You can use a dehydrator, heating pad, crockpot, yogurt maker, or oven to act as your incubator.

I opted for the oven because I didn’t own a dehydrator and why get the Crock-Pot dirty when I can just throw the jars in the oven (I’m all about whatever gives me fewer dishes to wash)? I found that when I was doing the GAPS diet I was using canning jars quite a bit to store things in the fridge (bone broth, soup, sauerkraut, kimchi, etc.) so I decided that since I would more than likely be using canning jars to store my yogurt, I might as well just make it in the jars (again, less washing).

How to Make Yogurt: the Basic Process

Making your own yogurt at home is relatively easy as long as you follow these steps:

First, choose your milk. This can be any kind of milk, but the more healthy your milk is the more healthy your yogurt will be. Raw milk is best, especially if following the GAPS protocol, but I didn’t have access to raw milk at the time I started making this. Instead, I used milk locally produced using a low pasteurization process that is non-homogenized, which means that I had that yummy layer of cream on top. You can also use goat’s milk.

Whatever milk you decide to use, make sure it is not ultra-pasteurized (the label of the milk will say whether it is ultra-pasteurized or homogenized). In order to get the most nutrition, I also opted for whole milk.

I typically begin by using a ½ gallon of milk. I don’t quite fill the jars all the way, so I end up using 2-quart jars and 1-pint jar.

Put your milk in a stainless steel pan on the stove and heat over medium heat until it reaches 180°F. The first time I made my yogurt I only had a basic candy thermometer, so I had to really stay with it to watch the temperature.

More recently, I’ve purchased a digital quick read thermometer. This makes the whole process so much easier because you can set the temperature alert to 180°F and the alarm will go off when it reaches that temperature. This is also helpful later, during the incubation period.

Once the milk reaches 180°F, pour it into the canning jars. Using a stainless steel wide-mouthed funnel made this easy to do, but just pouring from the pan or using a glass measuring cup works too.

The milk then needs to cool to 115°F. You can do this by either putting the milk in a cool water bath or just letting it sit on the counter, keeping a really good eye on it. I place the lids loosely on top of the jars to keep dirt out.

With my first batch, I used the cool water bath technique and it cooled down much sooner than I thought it would. At the time, I didn’t have a thermometer with an alarm to warn me that it had reached 115°F. Before I knew it, the yogurt was at 110°F and dropping and I flew into panic mode.

The yogurt still worked out, which just shows that it’s really hard to mess this process up and it doesn’t all have to be exact. The other thing you have to be careful of with the cool water bath is that if it’s too cool then you risk cracking the jars.

The second time I made a batch I was more patient and let it cool on its own on the countertop. It took longer but I wasn’t so stressed out from the quick temperature drop of the cool water bath.

Personally, I use organic plain Greek yogurt for my starter. Stir lightly, just to incorporate the yogurt into the warm milk. Then, put the lids on the jars.

Once the culture has been added, it is ready to go into the oven to incubate (with the lids on). You want a fairly consistent temperature.

Interestingly, it didn’t ruin my yogurt and it still came out really well. Again, it just goes to show that this method is hard to mess up (even with all of the mishaps during my first experiment). I have since (ok, my husband has) replaced our 40-watt bulb with a 60-watt bulb and it now holds the temperature closer to the optimal 115.

If the temperature goes above 115°F you run the risk of killing your culture. You may need to do some testing with your oven light to see what temperature it holds at when the light is on for a period of time and try 40-watt and 60-watt bulbs. The optimal incubation range is 95-115°F.

The yogurt needs to incubate for at least 10-12 hours. The GAPS protocol calls for a 24 hour incubation period in order for the majority of lactose to be consumed by the bacteria (this article does a great job explaining all of that). The longer it incubates, the more tangy the finished yogurt will be.

Important note: Just make sure not to forget that you are incubating yogurt in the oven and accidentally turn the oven on. My new digital quick read thermometer makes this less likely to happen. The thermometer probe goes into the oven sitting in one of the jars, while the digital display portion of it sits on top of my stove so that I can easily monitor the temperature of the yogurt. Seeing the digital display sitting on my stovetop keeps me from forgetting about the yogurt incubating in the oven and accidentally turning it on.

Once the yogurt is done incubating, refrigerate it to set the yogurt and just pour off the extra whey. The whey can be saved to use for other recipes, especially if you are following the GAPS protocol.

If you want a thicker yogurt then you can always strain off the remaining whey using cheesecloth. Personally, I’ve never been a fan of super thick yogurt so I found that I really enjoyed it just the way it was once the whey was poured off after the yogurt was refrigerated and set.

My favorite way to eat the yogurt is with local raw honey drizzled over it. It’s also really good in smoothies or added to soups.

An easy method for making your own yogurt that only requires milk, starter yogurt, a thermometer, and a couple canning jars and lids!

Have you tried your hand at making your own yogurt? How did it turn out? What type of starter and milk did you use?

Katie Wells, CTNC, MCHC, Founder and CEO of Wellness Mama and Co-Founder of Wellnesse, has a background in research, journalism, and nutrition. As a wife and mom of six, she turned to research and took health into her own hands to find answers to her health problems. WellnessMama.com is the culmination of her thousands of hours of research and all posts are medically reviewed and verified by the Wellness Mama research team. Katie is also the author of the bestselling books The Wellness Mama Cookbook and The Wellness Mama 5-Step Lifestyle Detox.

It Shouldn’t Be This Hard to Be Healthy…

Wellnesse Products is my very own personal care line created for my family and yours!

I couldn’t find natural products that met my standards so I created my own. Wellnesse is the result of a decade of research and dozens of tests, and your family can now use them too!

You May Also Enjoy These Posts…

6 Criteria You Must Consider Before Buying Curtains For Windows

422: I’m So Effing Tired: A Proven Plan to Beat Burnout & Boost Energy and Reclaim Your Life With Dr. Amy Shah

Olive Oil Benefits (& How to Choose One That Isn’t Fake!)